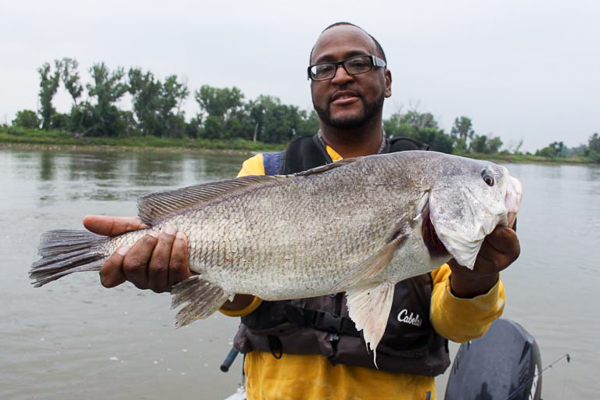 I almost always catch freshwater drum (gaspergou, sheephead) when I am fishing in the Missouri River. They can easily be caught with hook and worm or a lure such as a crankbait. I know several fishermen who swear they make great cut bait, but I have yet to have any success. A friend of mine who also fishes the Missouri River caught several 50# or larger blue catfish using very big chunks of cut drum. I am hoping to emulate his success and when I catch a small or medium size one I do keep it for bait. I always have fun catching them because they put up a fight and aggressively inhale small crankbaits. I hereby declare them the bass of the river..

Gaspergou Are Fun To Catch

The drum in the picture above, I caught behind a wingdike using a cheap crankbait from Walmart. I don’t invest heavily in crankbaits and I am sure I paid less than $3.00 for this particular lure which was designed to emulate a small shad. I fondly remember this fish because it hit right at the boat and started peeling drag back towards the flat behind the boat. I could tell by the way it was fighting that it was a drum and we were very low on bait that day and we figured we could chop it up for bait. When I finally put it in the boat I had sympathy for it because it was a rather large specimen and I always tend to let the big ones go to fight another day. Unfortunately for goldeye and Asian carp my grace does not extend that far. Any goldeye I catch is going into my cooler of ice to be bagged up and put in my freezer for cut bait. Goldeye are that precious. This lucky gaspergou was released to fight another day. 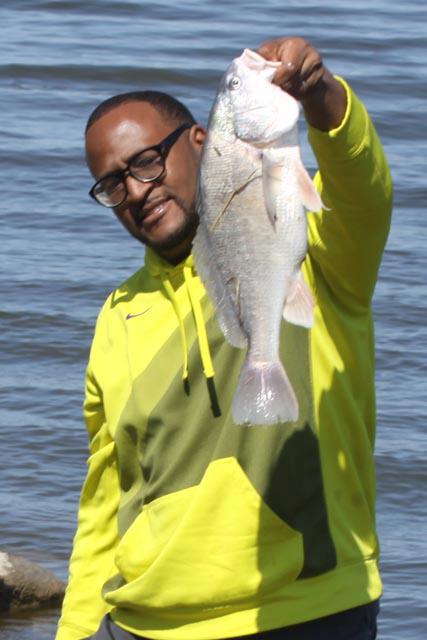 The drum in the picture is dear to me because I was fishing the spot my daddy took me to when I was a child at Desoto Bend Lake which borders both Nebraska and Iowa. I did not have my boat at this time and I had just got married and I wanted to show my beautiful wife where me and my dad spent countless hours fishing. Of course I took my bass pole and some crankbaits with me. When I hooked into this fish I thought at first it was a huge bass, much to my dismay it was a sheephead. But fishing is fishing and it put up a nice fight and was released to fight another day.