What is a Current Seam

A current seam is the change in speed in river current where the main flow of water is obstructed by some object or structure in the river. A point of land sticking out into the water disrupting the main current is an example. The tip of a wing dike which juts out into river causes an unmistakable, highly visible current seam. Underwater piles of rocks, sandbars and deep holes are all example of river elements that can affect the main current. What your eyes are seeing is two adjacent currents and one is slower than the other. 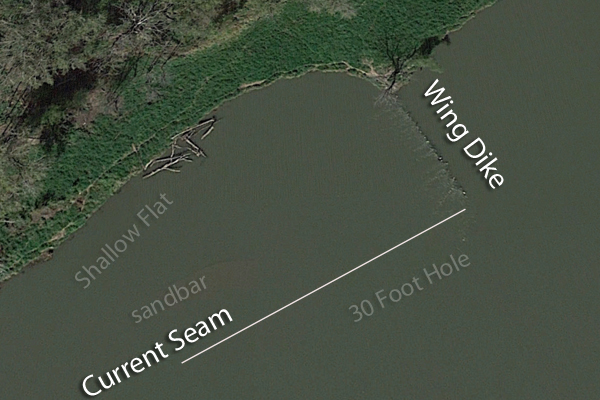 Why Should I Fish It?

The simple answer is because it is a proven spot to catch trophy catfish. My theory is that drifting food gets concentrated in the slower moving water and it attracts fish. I believe smaller fish want to get out of the faster current so they take refuge in the slower moving current adjacent to the current seam. Wing dikes drastically slow the water behind them and provide habitat for carp, drum and baitfish: all potential prey for a big catfish. Where there are small fish there are normally bigger fish lurking to make a meal of one of them.

How Do You Fish It?

Asking someone what the best way to fish a spot is like asking someone to tell you the difference between Ford and Chevy, Nikon or Canon or Humminbird or Lowrance: You are going to get a million different answers and various degrees of arguments. Some people will say fish above the obstruction that is creating the current seam, others will say something different. I am going to tell you what works best for me. Simply for safety sake I stay behind the wing dike. I don’t have to worry about a tree floating down the river and tangling in my anchor line. I also find the waves from the pleasure boats bounce the boat considerably less if the wing dike absorbs some of energy. 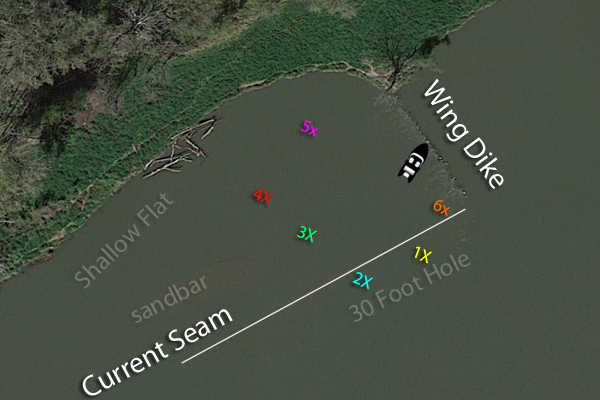 I have 6 rod holders on my boat. 4 in the back and 2 near the front. 1x is on the starboard side (right) and then 2x, 3x, and 4x on the port side (left). 5x is on the left side front and 6x is on the right side front. Normally I would handle 1x,2x and 6x and my partner the others. The numbers on this image show where we cast those rods.

1x at the top of the hole: This is by far my luckiest pole. My biggest fish have thus far have come out of the hole. I normally always have cut bait on this pole. Obviously I have measured it with my hummingbird, but I know it is deep because it takes the weight awhile to land on the bottom

2x at the end of the hole closer to the ledge and current seam. This is normally cut bait but I try to make sure I am putting the bait on the ledge of the hole. The hole at this point is sometimes starting to shallow out. Where the hole may be 30 feet, at this point it may only be 20-25.

3x in front of the sandbar:  At this point the depth is only 10-15 feet, sometimes less. I might not be fishing for catfish on this rod and I normally catch a carp, sturgeon or drum on a lighter rod. I have caught a10# blue here on skip jack (yes I imported it from Alabama), but this is mainly my pole to catch something to cut up into bait. If my partner is fishing it, he might fish it heavy for catfish

4x. This is basically a repeat of 3x. This is a shallow area going into a flat and I see carp rolling on the top of the water here. Many a carp caught on worm here have felt the end of my butcher knife. Drum is very abundant in this area also.

5X really shallow: Mainly a shallow area full of carp at the right time of year. I Have caught plenty of goldeye here, one turtle and a very small flathead.

6x behind the tip of the wing dike: This is a very snaggy area because there are plenty of rocks here where the wing dike is underwater and there are still rocks that will eat your no roll sinkers. Not much luck here except for goldeye using a small crankbait.

Where I Got My Information:

Winging It for River Catfish